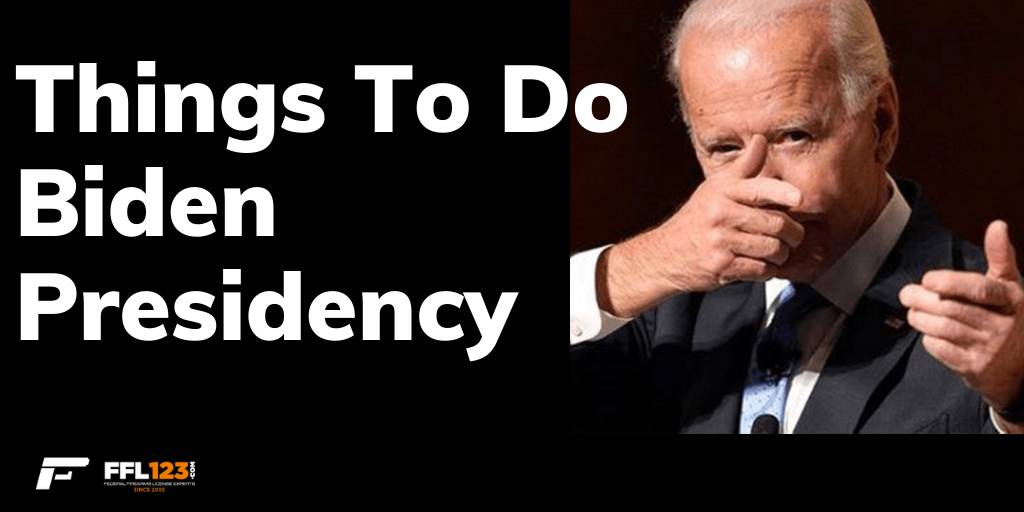 Barring some sort of wild change, it is certain at the time of this writing, that Joe Biden will be the 46th President of the United States. It is also certain that he has loudly campaigned on the sort of tiresome gun control that Democrats have bitterly clung to since the early 1990’s. In fact, his efforts are so tiresome, so repetitive, and so predictable as to not bear repeating here, although they can be summed up as a senile old man muttering worn out talking points of another generation in between sniffing the hair of children.

By now, gun owners should be used to this sort of thing. Every 2-4 years when the Democrats manage to get some sort of toehold in the Federal government, they want to try and push things that have been a losing proposition since 1994. In fact, dusty old relics like Pelosi and Biden probably still think it is 1994, unless their handlers have given them their medication that day. Perhaps that is why the DNC keeps pushing gun control on the nation. But we digress. It’s time for that regular panic session of gun owners everywhere and here are a few things you can do to cope with a Biden presidency.

The traditional response of gun owners everywhere when even a hint of gun control shows up, this tactic is of dubious value. States like California have proven that even “grandfathered” weapons will eventually be outlawed and taken by the state. This means that even though you think the 97 AR-15’s under your bed will be safe from future confiscation and bans, you are probably wrong. At best, your children will have to deal with future confiscation schemes. At worst, you will.

However, while this strategy may only delay the inevitable on a state level, it seems to work on a Federal level, where unpopular laws can quickly shift the balance of power in Congress, and so are a danger to even introduce.

Stockpiling can be hard on the wallet, but at the same time can offer some comfort. On the other hand, be realistic. How many guns of a similar type do you need? And if you have a dozen, then somebody who is just turning old enough to buy a first gun, or who has realized the importance of gun ownership might not be able to get one at all because you bought more than you can realistically use. Be rational and responsible when stockpiling.

Another traditional response of gun owners, usually as they sit on tens of thousands of rounds of .22LR dreaming of the day when it will be a substitute currency or they can fight a heroic resistance against the fantasy civil war of their dreams with their Ruger 10/22.

This does no good and simply makes gun owners look unhinged and plays into all sorts of media stereotypes that undermines our public image. If you want to play GI Joe in a bunker, and squat in front of a fire eating MRE’s with your fingers, while clutching a rifle with every top dollar and trendy accessory on it, go right ahead, Just don’t pretend you represent the mainstream. And don’t be surprised if most folks don’t want to listen to your conspiracy theories about Chinese space aliens from the UN invading to take our guns and impose some New World Order.

There are always a few Fudds who simply don’t care, because they don’t think their “traditional” hunting rifles, and 1911’s hand machined by angels will be exempt from bans. In between muttering about “plastic rifles” and “ain’t nobody needs a 30 round clipazine to hunt with” these sorts of people will happily sell out American gun owners in order to feel secure with their pile of “real” guns. Don’t be a Fudd, they’ll come for you eventually too.

In an ideal world, we’d never be having these sorts of conversations. But the left wing has been attacking our gun rights for generations, and once again feels emboldened to do so. There is one sure fire way to ensure your guns are protected from any ban though. Intrigued? Keep reading.

It is a fact that no matter what gets banned, government carves exemptions for themselves. After all, the state wants to have it’s guns even if you can’t have yours. And because Federal law makes no way for a government agency to acquire new guns except through an FFL, FFL’s have to be able to purchase and acquire any sort of firearm that can be made and sold.

Which means, you guessed it… you move your gun collection into inventory as samples and demo guns, and protect your guns and investments, while also running a profitable small business, maybe even from home!

5. Get Your FFL Today

FFL123 has helped tens of thousands of Americans just like you get the FFL they want and deserve. We’ve been at this for nearly two decades now, and our team of industry insider experts has helped folks get everything from a simple kitchen table FFL for small home business, to getting into the business of making and selling NFA items like machine guns and silencers.

If you want to:

Then click here RIGHT NOW to get started on your journey to having your own FFL.

There is no better time than right now to get an FFL, and 2021 is shaping up to be another record breaking year of gun sales. We cannot rely on the Supreme Court to protect our rights, and the future of ownership of common firearms may be at risk during a Biden presidency. The FFL you get now will protect your guns into the future. Let’s get you started today, and discover a new legal and financial potential you never knew was possible!