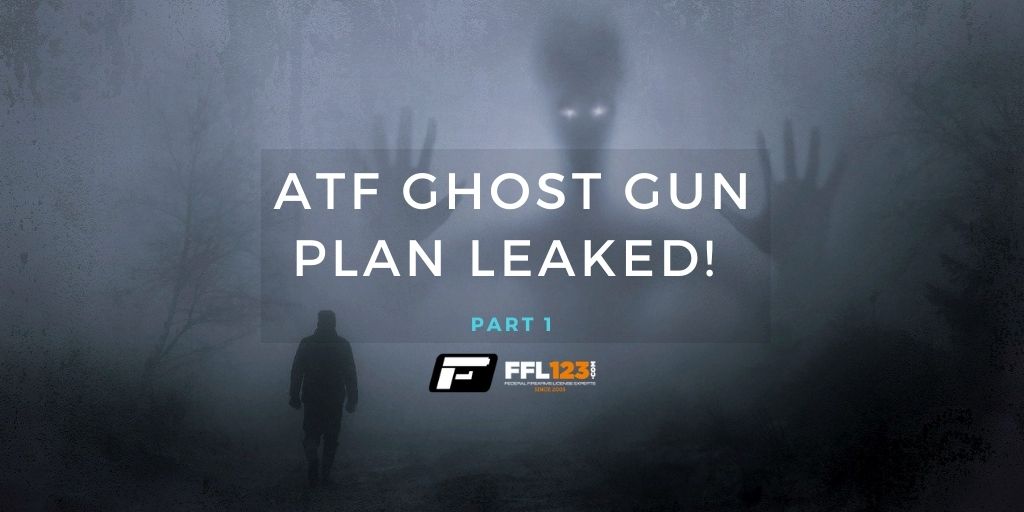 Recently, a draft of proposed rules by the ATF concerning so-called “ghost guns” was leaked. This 107 page document is full of the sort of rambling and nonsense one would expect from the ATF after being ordered by Biden to “do something.” Building on the precedent of Trump’s outlandish actions against bump stocks, the ATF is now busy running wild over definitions and attempting to rewrite legislation through unsupervised rulemaking just like they got away with on bump stocks.

We’ve gone over this document and pulled out the high points for you, because even though it addresses “ghost guns” or homemade guns without serial numbers, there are important things every FFL holder should be aware of. So, lets dive right in…

“The Department of Justice (“Department”) proposes amending Bureau of Alcohol, Tobacco, Firearms, and Explosives (“ATF”) regulations to provide new regulatory definitions of “firearm frame or receiver” and “frame or receiver” because the prior regulations failed to capture the full meaning of those terms.  The Department also proposes amending ATF’s definitions of “firearm”and “gunsmith” to clarify the meaning of those terms,and to provide definitions of terms such as “complete weapon,” “complete muffler or silencer device,” “privately made firearm,” and “readily” for purposes of clarity given advancements in firearms technology.  Further, the Department proposes amendments to ATF’s regulations on marking and record keeping that are necessary to implement these new or amended definitions.”

A quick translation from ATF to English basically sums this up as “Well, when Congress defined frame or receiver, they had no idea what they were doing, and didn’t bother to figure out that some guns have upper and lower receivers, and so left us a statutory mess that has resulted in court cases getting thrown out because on some guns like the AR-15 or even the century plus old Dreyse pistol, there is no frame or receiver that fits the statutory definition.”

We can go one step further and note that Congress originally defined what is or is not a receiver or frame. This is firmly set in law, and what the ATF is doing is attempting to circumvent the legislative process and redefine frame or receiver without Congressional approval. This is what people in the legal profession usually describe as “probably illegal.”

We must also note that in order to define what is a frame or receiver, we also have to define what is not a frame or receiver. To do that, the ATF adopted a rule that any receiver 80 percent finished or less was not legally a receiver. That’s how we get all the 80 percent frames and receivers on the market right now. Because Congress had defined a firearm frame, but not what wasn’t a frame, the ATF had to do that through various rulemaking processes.

So What is a Firearm Frame?

Back in 1968 when Congress defined a frame, they were clearly not even aware of basic firearms history. A frame was presumed to be a single component that held the key parts of a gun and the barrel. The definition for frame – that part of the gun which has to be serialized and is legally considered the firearm reads thus “That part of a firearm which provides housing for the hammer, bolt or breechblock, and firing mechanism, and which is usually threaded at its forward portion to receive the barrel. “

Congress had ignored split receiver guns like the AR-15 (commercially available to private citizens for several years, and the M-16 had been in use even longer), the Ruger Mk I .22 pistol, or even ancient Pre WWI guns like the Dreyse Model 1907 pistol, all of which did not have a single piece you could point to and say “this is the receiver under this new law.”

However, because most guns had obvious receivers, and the intent was just to pick a part that would carry the serial number and be the “legally a gun” part of a gun, everyone managed, although it leads to weird inconsitencies, where the upper part of a Ruger Mk I is the frame, while the lower part of an AR-15 is the frame. Were they being consistent, odds are the more complex upper part would be the regulated part, but we know better than to expect consistency from the ATF.

As we mentioned, there was also a need to establish what is or is not a frame, and we wound up with the 80 percent receiver market. All well and good until politicians and anti-gun radicals decided that “ghost guns” aka homemade guns that generally are built for private use were a problem.

On top of that, because the AR-15 lower does not really fit the legal definition of the frame, the ATF has lost several cases involving AR lowers where it was successfully argued that the lower is not a gun, and ergo not something under the purview of Federal firearms laws, which gives the ATF an incentive to try and deal with split receiver guns in a way that recognizes what Congress failed to do.

It is absolutely true that criminals have made guns themselves with parts kits and 80 percent frames or lowers and used them in crime. The extent that homemade guns contribute to crime is hotly debated, and these guns remain the exception, rather than the rule to guns recovered by police.

More importantly, they haven’t seemed to have much trouble tracing those guns – the very purpose they pretend firearm serial numbers are needed for. So, in a fit of “do something” Biden has ordered the ATF to tackle the manufactured problem of homemade guns, which first requires more clearly defining what is or is not a receiver or frame, and that’s where the problem starts…

The author can use his 3D printer to make a Glock compatible frame or AR-15 lower in around a day’s time depending on various print settings. After that, they assemble much like any other fully stripped lower and I can go from raw print to finished gun in under an hour usually unless I messed something up.

Builders of guns off receiver flats, 80 percent lowers or frames, or who convert steel pressure tubing into frames for historical submachine gun conversions can usually whip out a gun in 1-5 hours depending on the complexity of the build, skill of the builder, tools available, etc…

The ATF is now looking to more firmly define readily converted, since the means to build the regulated parts of guns at home is within the means of anyone with a Dremel tool and the right 80 percent frame. In other words, it’s pretty clear they now plan to consider something a person can turn into a frame with readily available tools, diagrams and jigs to be readily converted, because for better or worse it generally is.

What Does This Mean for FFL’s?

It means there are about to be a lot of different guns and parts with serial numbers that have to handled on a 4473 through an FFL. But as they say on TV, wait, there is more! We’ve shown you that Biden’s ATF is going after homemade guns. We’ve shown you that the definition of a firearm frame or receiver is inconsistent, and that they are planning to go after 80 percent frames or even anything that with some tools and jigs can be turned into a gun. That means we can likely expect to see background checks for AK receiver flats, and possibly even AR uppers. But 107 pages is a lot to go through. This was an introduction to what is going on. Our next article will look at how the ATF plans to require FFL holders to serialize a wide range of previously unnumbered parts and guns, how they plan to treat homemade guns for personal use, and how the life of an FFL holder is about to get more radically complex.

Take some time to read over the proposed rules. They aren’t published yet, but this is what they are thinking. Look over your business and see how they will impact you, and get ready to comment when the proposed rules are published.