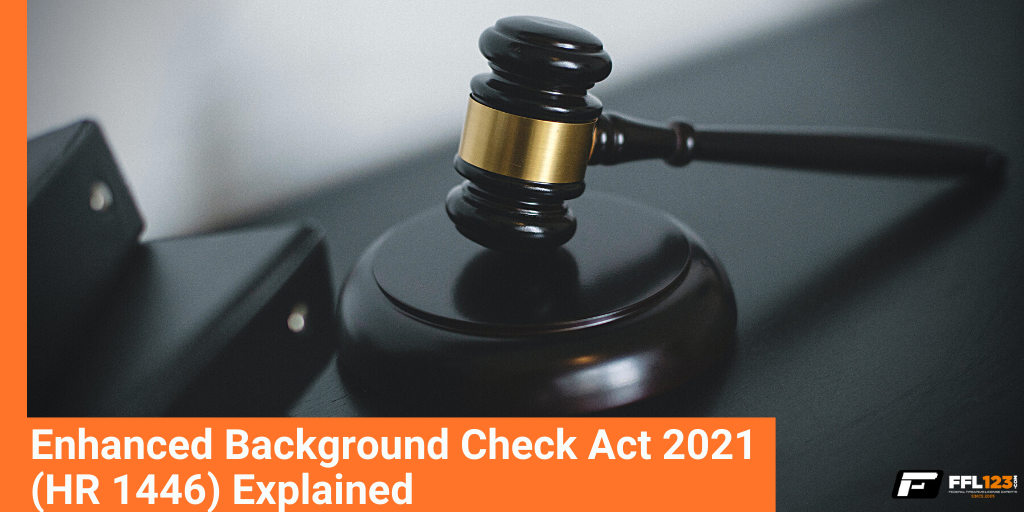 It’s no secret that Democrats hate guns. Well, not all of them, but most of them. Therefore, it comes as no surprise that they keep introducing new, restrictive bills. We’re going to look at HR 1446, or the Enhanced Background Check Act of 2021.

HR 1446 was introduced on March 1, 2021, and claims that it would close the so-called “Charleston Loophole,” wherein a firearm may be transferred to an individual if there isn’t a denial of the background check within three days.

Current law requires a Federal Firearm Licensee (FFL) to complete a background check of some kind before transferring a firearm to a non-FFL.

Usually, a response to the background check is received by the FFL within a few minutes. Sometimes it can take a few hours, or in extreme cases, it can take multiple days. The delay could be from a slow system response, an anomaly in the person’s background, or multiple people with the same name.

Keeping the Constitutional rights of law-abiding Americans in mind, if a denial is not received within three days, the FFL may transfer the firearm to the customer even if the background check hasn’t come through in that amount of time. This prevents the government from effectively banning guns by delaying a background check response.

Anti-gunners refer to this kind of limit to government power as a “loophole,” which is an absolute abuse of that word’s definition.

This new bill, proposed by Democratic House Whip Representative Jim Clyburn, was already introduced in the last Congress as HR 1112, where it passed but failed in the Senate.

The Enhanced Background Checks Act of 2021 will increase the waiting period an FFL must wait before transferring a firearm without an answer to a background check from three business days after the background check was submitted to 10 business days, and even then, only after a petition is filed by the customer.

This puts the burden of government failure on the private, law-abiding citizen. The customer must submit an electronic petition for review by the U.S. Attorney General certifying that there is no reason for them to believe that they wouldn’t pass the background check.

If there is still no answer (denial) once 10 business days have passed after the customer’s petition was filed, the firearm may be transferred. If you’re keeping track, that means the transfer process could take up to 20 days instead of three days as it currently stands.

The bill (background check act 2021) also changes the language of a category of “prohibited persons.” Currently, those who have been “adjudicated as a mental defective,” among other prohibiting factors, may not lawfully possess firearms or ammunition. The bill would change the language to “adjudicated with mental illness, severe developmental disability, or severe emotional instability.”

Our Industry Speaks Out

Larry Keane, of the National Shooting Sports Foundation, summarized the problems. “This bill increases the burden on small business firearm retailer owners and flips the burden of proof on its head. This would make it incumbent upon the law-abiding citizen to prove his or her innocence to the government to exercise their Second Amendment right to purchase a firearm, instead of the government being responsible for proving an individual is prohibited. It could potentially deny a law-abiding citizen their rights for up to a month, while they are saddled with the burden of proving their innocence. That’s un-American.

“Rather than placing further burdens on retailers and law-abiding gun owners, Congress should focus on adequately resourcing NICS. NSSF is the only organization that has successfully advocated for NICS to have the necessary resources to perform its mission in a timely manner.”

While you’re probably not interested in the “legalese” used in bills, we figured it was still a good idea to provide the full details of what this bill says. The Enhanced Background Check of 2021 in HR 1446 proposes to change the law concerning background check requirements found in 18 U.S. Code § 922.

If this bill becomes law, it will remove the section which allows an FFL to transfer a firearm if a response it’s not received to a background check within three business days:

18 U.S. Code § 922(t)(1)(B)(ii) – [an FFL must run a background check and may not transfer the firearm unless they receive an approval or] “(ii) 3 business days (meaning a day on which State offices are open) have elapsed since the licensee contacted the system, and the system has not notified the licensee that the receipt of a firearm by such other person would [be prohibited from possessing a firearm]”

It will then replace that removed section with:

(I) not fewer than 10 business days (meaning a day on which State offices are open) has elapsed since the licensee contacted the system, and the system has not notified the licensee that the receipt of a firearm by such other person would violate subsection (g) or (n) of this section, and the other person has submitted, electronically through a website established by the Attorney General or by first-class mail, a petition for review which—

(II) 10 business days have elapsed since the other person so submitted the petition, and the system has not notified the licensee that the receipt of a firearm by such other person would violate subsection (g) or (n) of this section; and

and add the following to the end of the section:

The Attorney General shall—

(A) prescribe the form on which a petition shall be submitted pursuant to paragraph (1)(B)(ii);

(B) make the form available electronically, and provide a copy of the form to all licensees referred to in paragraph (1);

(C) provide the petitioner and the licensee involved written notice of receipt of the petition, either electronically or by first-class mail; and

(D) respond on an expedited basis to any such petition received by the Attorney General.

(A) If, after 3 business days have elapsed since the licensee initially contacted the system about a firearm transaction, the system notifies the licensee that the receipt of a firearm by such other person would not violate subsection (g) or (n), the licensee may continue to rely on that notification for the longer of—

(i)an additional 25 calendar days after the licensee receives the notification;

or (ii)30 calendar days after the date of the initial contact.

The bill would also change the prohibition of firearms by “mental defectives” by removing the phrase:

adjudicated as a mental defective

and replacing it with:

The following is the statement released from Rep Clyburn’s office on this bill:

The purpose of the Enhanced Background Checks Act of 2021 is to strengthen the background check procedures to be followed before a Federal firearms licensee may transfer a firearm to a person who is not such a licensee.

When an individual attempts to purchase a firearm from a licensed dealer, the FBI has three days to complete a background check. If the background check is not completed within three days, the firearm sale may proceed without a completed check. This provision- the “Charleston Loophole” allowed a gunman to purchase the firearm used to murder nine parishioners at Emanuel A.M.E. Church in Charleston, South Carolina in 2015.

The Enhanced Background Checks Act of 2021 addresses this deficiency by providing the FBI additional time to complete background checks, and gives notice to the FBI which cases need to be prioritized for review.

The passage of 10 business days since a firearms licensee requested a NCIS [sic] background check AND the system has not notified the licensee that the receipt of a firearm by such person would be unlawful;

The person trying to obtain the firearm submit an electronic petition for review to the U.S. Attorney General; and

(This petition requires the person to certify that they have no reason to believe that Federal, State, or local law prohibit[s] them from purchasing or possessing a firearm AND requests the system respond within 10 days after the date the petition was submitted.)

The passage of 10 business days since the person trying to obtain the firearm submitted the petition, AND the system has not [notified] the licensee that the receipt of [the] firearm by such person would be unlawful.

Further, this section outlines how long a licensee can rely on a system notification that the receipt of a firearm by a person would not be unlawful.

Sec. 3: Requires a GAO report to the House and Senate Judiciary Committees analyzing the extent to which this language has prevented firearms from being transferred to prohibited persons.

Sec. 4: Requires the FBI make an annual report to the public on the number of petitions received for which a determination was not made within the 10-day petition period.

Sec. 5: Requires a GAO report analyzing this Act’s effect on the safety of victims of domestic violence and whether any further amendments to the background check process are needed.

Sec. 6: Effective Date- 210 days after the date of the enactment of this Act.

Get Your FFL Today

FFL123’s guides will help you navigate the process of getting your FFL and avoid any cumbersome burdens cooked up by the members of Congress. Don’t wait, get started today!