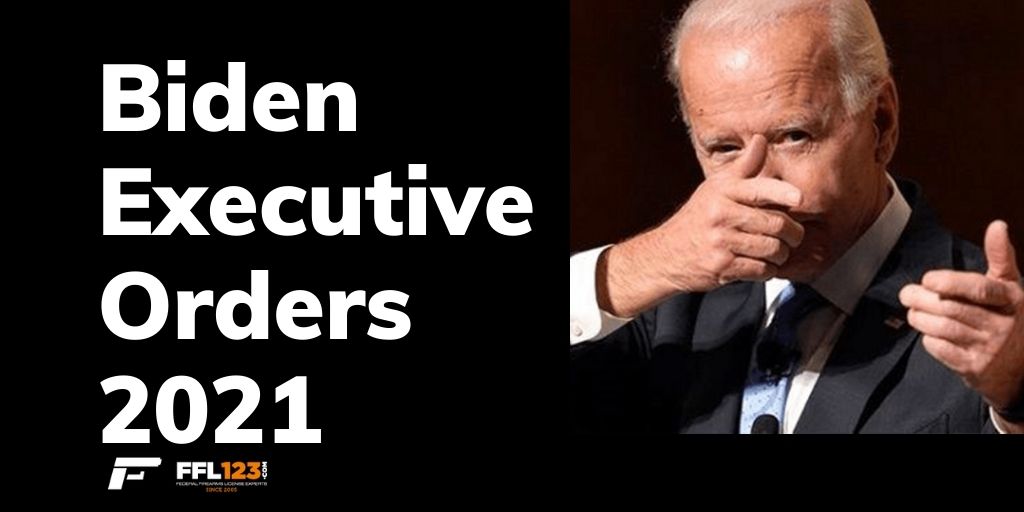 We’ve discussed more than a few times the ways in which Biden can or does pose a threat to the free exercise of gun rights in America. During the odd bout of lucidity, he’s chanted the anti-gun mantras of a generation or more ago, while still pretending America is awash in violence akin to something out of an 80’s action movie. Biden also knows that gun control is not popular with Americans, and with a divided Senate is going to be almost impossible to pass for the near future.

However with the typical liberal desire to “do something” Biden has issued a series of semi-impotent “executive actions” which he pretends will somehow do something about the violence caused by the policies of his party which have destroyed cities for generations. Let’s take a closer look at his madness.

What Had Been Promised (Or Threatened)

Early on Biden made his usual incoherent noises threatening to go after “these new weapons that are being made by 3D equipment that aren’t registered as guns at all.” Perhaps somebody should tell the president that outside of a few morally regressive states like California or New York, and the NFA, guns simply aren’t registered in this country regardless of how they are made. And boy howdy wait until he finds out that all manufacturing equipment is in fact three dimensional. Maybe his handlers can explain to him that he might want to use the words “3D printed” and at least sound like he knows what he’s talking about.

Biden also thought he might go after imported guns, but his current actions didn’t include that. Maybe his buddies in China didn’t want him to cut off the flow of Chinese shotguns into the country. Psst, hey Joe, how about ending the import bans on Chinese ammo? Your friends in Bejing will appreciate the boost and it will help with the ammo shortage over here.

Biden wound up issuing directives on several topics to the Justice Department that range from “well this is already being worked on, but hey we can spin it” to “this is just impotent virtue signaling.”

Earlier on, we saw Biden acting like he was going to cut off imports and target computer code (a delightful confluence of the First and Second Amendments) along with various other tough guy noises.

In the end, we got a bunch of malarkey that only sounds impressive to somebody who doesn’t know what end of a gun the bullet comes out of, or is professionally ignorant about firearms and firearms law (aka, most anti-gunners)

So-called “Ghost Guns” have been a target of the child-like rage of the American left ever since they figured out perfectly law abiding American citizens could assemble perfectly legal guns in the privacy and comfort of their homes using inexpensive power tools or home machining tools. Because not only can people not have hobbies that anger and confuse the left, the very real risk of unpopular minorities or political factions doing legal things in legal ways that create legal guns was just too much for the anti-gun left, and the ghost gun myth was born.

No just a hobby, an easy way to get a gun without the hassle of shopping and waiting, or yes, a way to protect your privacy from the government, the left believes homemade guns are the weapon of choice for criminals, and with no serial number to trace, they will cause the collapse of society and possibly a new variant of COVID or something stupid like that.

Anyway, Biden told his minions at the DOJ to try and craft a rule banning 80 percent frames and lowers. That shows how useless he is, because a proposed rule is not a guaranteed rule and can often be shouted, and fought down. Of course the ATF’s out of control rulemaking is a real problem, so this needs to be carefully watched. Many FFL’s make a tidy bit of income selling gun parts kits and 80 percent frames. Just remember, the same agency that made a rule deciding those weren’t firearms can make a rule deciding they are…

We already went through the ATF trying to reclassify pistol braced handguns as SBR’s subject to the NFA. Looks like that mess is back on the menu. Last time they promised free tax stamps and expedited SBR registration for all who wanted them. It’s likely they’ll do that again as part of transitioning some or all braced handguns to the NFA if this rule passes. Suggestion, now is a great time to become a stamp collector, and get a cheap brace for every single gun you can possibly think of. There has to be a measure of satisfaction in having the ATF issue dozens or more stamps as a form of silent protest.

Of course in an ideal world this won’t happen, but if it does, get ready to game the system to your benefit.

In a perfect world, there would be no need for so-called “red flag laws” which on paper purport to offer a way to temporarily remove guns from somebody who poses a credible threat of immediate violence to themselves, or others. In an ideal world, such laws would in fact protect the rights, due process and civil liberties of all involved and not be subject to abuse or used to harass innocent people.

We do not live in a perfect or ideal world, so such laws are fraught with danger and will without a question be used to abuse, harass and threaten perfectly innocent people, while subjecting them to a Byzantine morass of horrific laws and indifferent courts who don’t care about anything except what looks good to their masters in the gun control industrial complex.

Biden’s order for the DOJ to craft “model” red flag laws for states to adopt if they wish is both a pathetic bit of posturing and a dangerous one, because we can be absolutely certain that any such laws will be unfairly applied and used to oppress rather than help.

Biden wants to bring back bans on popular modern sporting arms, put commonly used handguns on the NFA, cut off imports of guns, restrict access to ammo, and basically do everything possible to ensure the only people who have guns are rich DNC donors who take out their sporting shotgun once a year to prove they are pro gun.

While the left screams about the evils of law enforcement, they also want that law enforcement to come after you and take your guns if you own ones that look the wrong way, or if you happen to have offended a co-worker with supporting the wrong political party, and are now “unstable and dangerous.”

One of the best ways to protect your guns in these uncertain and troubled times is with your own FFL. Not only does having an FFL offer an excellent full or part time income, but FFL holders by the very definition of what they do are pretty much exempt from gun control. Why? Because the same government that hates your guns demands they be able to get them for themselves, so FFL’s have to be able to transfer not only grandfathered guns to private parties, but also to sell them to government agencies. All this means that FFL’s will get to hold in inventory guns most people would be unable to get.

In fact, you can even transfer your own guns into your FFL inventory! No matter if it is a demo, a training gun, or simply a collectible display gun that is part of your store’s inventory and display, by moving your guns onto your FFL’s books and using them as part of your business, they are protected from future gun laws!

Want to make extra money and take extra steps to protect yourself from Biden’s mad gun control regime? Click here right now and get started with the nation’s most popular and easiest online FFL guide program! You’ll be glad you did…