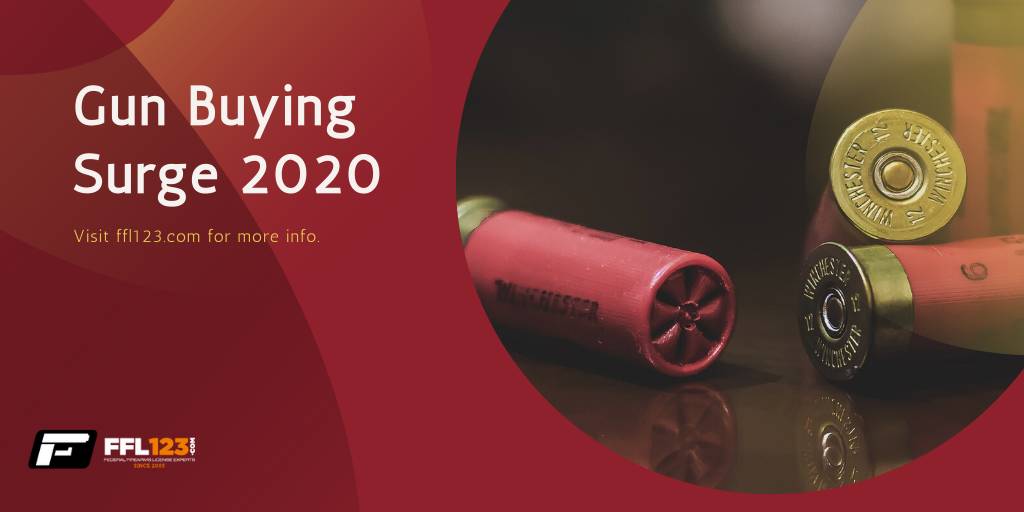 In case you haven’t noticed, something striking is happening in the gun industry right now.

Everyone is sold out. Often literally. Guns and ammo fly off the shelf as soon as they can be entered into inventory and can command enormous premiums online. As of this writing, the author noted common 5.56 ball selling for 65 cents a round in some places. Guns are selling for well over normal retail, and ammo shortages may last until 2021. We can reasonably expect guns to be in short supply at least that long as well.

A terrible combination of civil unrest, distrust of government, a hotly contested presidential election, and a backdrop of increasingly unchecked violence in America’s urban centers are causing millions of Americans to buy and stockpile guns and ammo for the first time. Let’s take a closer look at this phenomenon.

Not only first time buyers, but minority buyers. Some studies suggest that African Americans make up the majority of new, first-time gun purchases right now. This is related to various factors, including increasing distrust of government and law enforcement, and a rise in racial violence in some areas.  With over one million new guns sold to African Americans this year, it is clear that the FFL has become the first line of defense against racial violence, underscoring the truth of the 2nd Amendment.

However, regardless of race, first time gun buyers (and there are perhaps over 3 million of them just between March and June) represent the bulk of gun purchases now.  This is to be expected, as unlike previous panic buys in guns and ammo which were shaped by political circumstances where existing gun owners feared future restrictive bans, gun buyers now are worried about personal safety and the fact they don’t have any sort of gun at all.

So what can we learn from this?

We sat down with Darryl Hadfield of 3 Guy Supply near Cincinnati. He runs a small FFL and training business that normally sees a predictably steady flow of customers, but like all FFL’s this year, things changed rapidly.

“We’ve seen first-time buyers – some self-identifying, some who you can tell because of their lack of safe firearms handling skills and knowledge – for a while now, but sadly, tapering off because of the lack of availability of firearms.

We’ve had repeat customers who’re buying more to add to their collection, but we’ve also had first-time buyers who go immediately to also wanting ammo, and wanting to know details about use-of-force laws, and when they’re allowed to shoot an intruder.”

This is typical of most FFL’s experience. Existing customers will always want more guns for their collections. But they almost invariably own guns for personal protection, so their buying habits now may be more directed towards maintaining or growing existing ammo stockpiles or perhaps spare parts.

“Probably the most concerning is that because of the COVID19 panic, people who indicate a desire to become licensed for concealed carry have even suggested carrying without the permit, because they’d rather be arrested than dead.”

This more completely underscores the fact that people are worried about their personal safety and the inability or unwillingness of police and government to keep them and their communities safe.

What Does This Mean For The Industry?

Right now gun dealers are seeing record breaking surges in sales each month. This is expected to run at least through the November elections, and given the strong likelihood of civil unrest regardless of who wins the presidential race, plus traditional holiday sales, we can expect this surge of sales to continue through 2020.

Should there be a perception that new anti-gun legislation is possible on a national level due to the November elections, expect to see an even greater demand for guns and ammo, as existing gun owners (and probably a good number of this year’s new gun owners) race to secure guns and magazines they might fear will be banned in future legislation. If this happens, an already strained supply chain will collapse under the weight of purchase demands.

Right Now There Are Basically No Guns

We’ve already seen it in other articles, but guns and ammo are basically sold out around the country. As guns come into dealer inventories, they fly off the shelves. Oh there are some guns that aren’t selling. Highly specialized sporting and target guns, and it’s still quite possible to get collector and vintage guns fairly easily. Which drives the point home. People are buying guns for personal protection, not hunting or sport. So if you are a collector, thins probably are mostly business as usual. After all, people aren’t lining up to buy Trapdoor Springfields.

However, they are lining up to buy pretty much any gun that is suitable for personal or home defense. That means most all handguns, shotguns with 18-22” barrels, various AR style sporting rifles, and so forth.

The FFL’s Role In a Gun Buying Surge

Because all new guns must be sold through an FFL, and some states require all guns be sold through an FFL, FFL dealers are swamped right now – if they can get inventory. Right now FFL’s can expect to have a swarm of customers asking them for guns even if they don’t have any. Backorders are a common thing, and pretty much any new inventory of guns and ammo flies off the shelf.

NICS is overwhelmed and transactions that should be “instant” are timing out, which leads to frustration with customers who even if they could normally take their gun home the same day, are unable to. Ammo shortages make things worse, as proper training grows increasingly more expensive and difficult, with prices having doubled or more in many cases.

As an FFL holder, you are not only trying to get as many guns out the door as you can, you are also dealing with a host of first time buyers who are not well versed in the finer points of gun ownership. Dealers in anti-gun states are witnessing people shocked at the gun control they voted for finally impacting them personally. And customers who don’t have a background in firearms ownership will express all sorts of myths and misunderstandings as truth, and exhibit little or no skill in firearms handling.

While this can be frustrating to deal with at times, the role of an FFL holder should also be one of education. If you offer training, now is a great time to ramp that service up, or even add special classes just for the most fundamental of all firearms basics.

FFL123 offers their members and customers ongoing training and educational material. This is invaluable during times of uncertainty or growth in the industry. We can help you be better prepared to help new customers and old alike during shifts in the industry and market.

If you don’t have an FFL, we can help you get the one you want! FFL123 has been the leading choice for online FFL training for nearly two decades. Click here to get started and discover the incredible FFL123 advantage that no other FFL guide can offer!