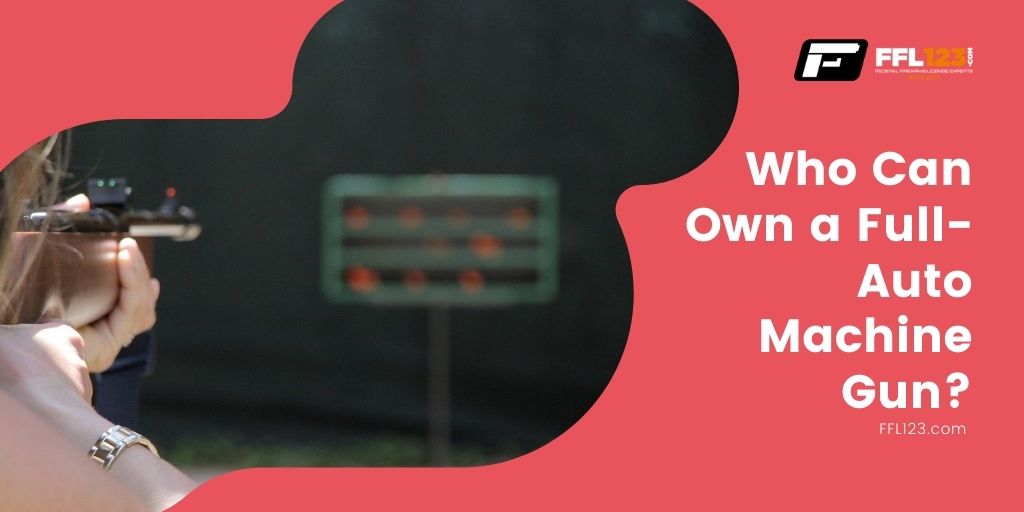 Now to answer everyone’s second question – “don’t I need a special permit?” – and the answer is no. No, you do not need a special permit (or a secret handshake) to buy a full-auto machine gun, but you do have to follow the law. Essentially, if you’re legally able to buy any other kind of gun or NFA item, then you’re legally able to buy a machine gun. Of course, it’s a bit more nuanced than that, and we’ll get into all of those details.

As long as you abide by, and are in compliance with, all applicable federal, state, and local laws, then you can absolutely purchase and possess a full-auto machine gun.

Get a Free Report

Here are the requirements for owning a machine gun in the United States:

The first requirement we mentioned about machine gun ownership above was that you must not be a “prohibited person.”

A “prohibited person” includes anyone who:

The other big requirement for owning a machine gun is that it must have been made before May 19, 1986. It was the 1986 Hughes Amendment to the Firearms Owners Protection Act which closed the NFA registry to new machine guns. After May 19, 1986, private citizens would no longer be allowed to register new machine guns, but transfers of existing registered guns are still allowed. Because of this, machine guns are becoming more and more increasingly expensive, and you should expect to spend a minimum of $6,000-$10,000 to buy one. Popular models, like M16s and Tommy Guns, are closer to $30,000 or more. Essentially, machine guns are quickly becoming investments rather than practical firearms for use.

However, there is still a way to get a brand new machine gun. Interested? Well then, keep reading.

Gun Manufacturing with an SOT

Under current law, only government agencies can acquire newly-made machine guns – but they still need dealers to buy them from and manufacturers to make them.

Here’s where it gets interesting…

An 03 SOT needs a letter from a law enforcement agency asking to see a particular machine gun demonstrated. This is called a demo letter, and the gun is called a dealer sample. Only 02 and 03 SOTs can acquire dealer samples, and only with a demo letter. Once you allow the agency to examine the gun, it is yours to keep as long as you maintain your SOT. Many SOT holders acquire demo guns from friendly local law enforcement requests.

However, if you cannot get a demo letter, an 03 SOT gun dealer has no other way of acquiring a machine gun. If you are an 02 SOT, though, you are legally allowed to build as many machine guns or other NFA devices as you wish (following a certain procedure, of course) and may retain them for as long as you maintain your SOT.

That’s right: you can build a machine gun (full-auto machine gun) legally and keep it for as long as you wish and are in business!

Too Good to Be True?

You might think that this sounds shady, but it’s not. As long as you are conducting legal business, there are all sorts of reasons to build legal machine guns, including proof of concept, experimentation, range rentals, demo guns, movie prop rentals, and more. Along the way, as an incidental to doing business, there is absolutely nothing wrong with enjoying the machine guns you have built or acquired. In fact, it would be stupid not to do so!

Ready to Get Your SOT?

No matter if you want an 02 or 03 SOT gun license, there are a number of different hurdles to overcome. You first have to get a regular FFL, and then have to successfully apply for your SOT. That means knowing a lot of different regulations, laws, and procedures. After all, even an 02 SOT can’t just start cranking out machine guns in their garage because the ATF likes to know what you are doing.

You can work all this out on your own after extensive study of appropriate laws and rules. Or, you can take the fast, easy, and simple way out.

FFL123 has been helping people just like you get their FFL and SOT for over 15 years and has tens of thousands of satisfied customers. Our team of industry insider experts have many decades of cumulative knowledge and have applied all of that to making sure that if you want an FFL and SOT, then you’ll get your FFL and SOT. In fact, if you don’t have success after using our product, then you get 150% of your money back!

Ready to use the best online FFL guide out there? Ready to take advantage of a team of industry insiders who will work with you every step of the way? Then discover the FFL123 advantage, and get our FFL and SOT online FFL guide today!