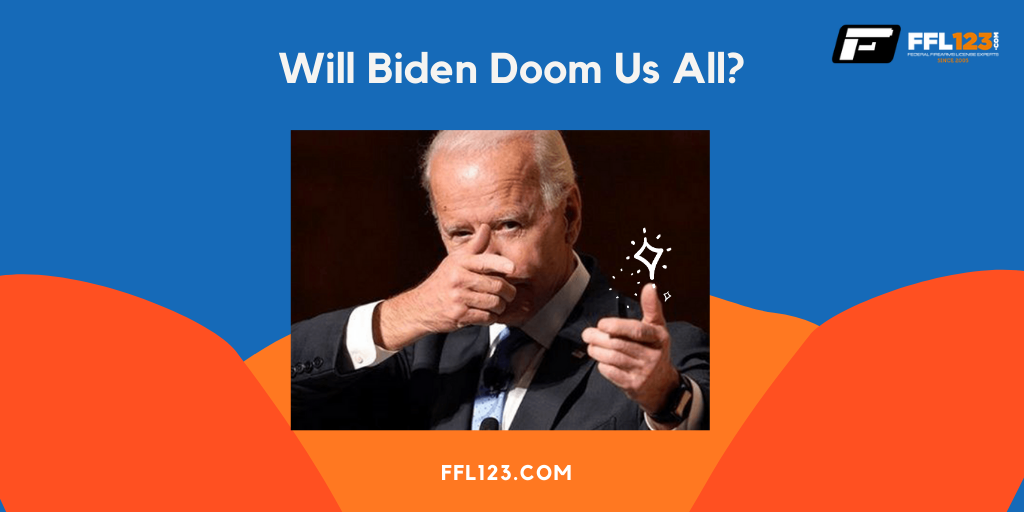 On January 20th, Joe Biden will be inaugurated the 46th President of the United States. He will have a democrat majority congress, and an urge to engage in progressive left wing politics in order to differentiate himself from Trump, and appease his support base who have spent the last four years feeling oppressed and victimized in the midst of one of the greatest economies the world has ever seen, and during a time when the US engaged in no new foreign wars.

Part of this progressive agenda always includes gun control. To the progressive mind, we must dismantle law enforcement because of racism, but have enough cops to seize guns from law abiding people. We must fight racial injustice by perpetuating gun control, which was literally invented to disarm black people and undesirable social classes. And along the way, we must also punish gun owners for not being good progressive sheep, while surrounding government buildings with walls and men with guns.

The lesson is clear. The state is supreme, and your civil rights mean little, except in service to the state. Contradictions are acceptable so long as they ensure that the other side is suppressed and kept in line. Society and even cornerstones of civilization are to be sacrificed in order to appease a progressive sense of collective guilt and insecurity. The fear that somebody, somewhere might be happy and content on their own, doing no harm is something that surely keeps Biden and his people awake at night, and they are determined to crush that.

In short, everything. When the left feels emboldened, they try to take out everything they can, in a fit of petulant revenge. To them the simple act of owning the “wrong” sort of firearm or owning guns and voting the wrong way is a terrible sin that must be punished, and vengeance wreaked. To Biden’s left, this revenge lust is a cheap two dimensional fantasy that dreams if guns with certain cosmetic features are banned, then all the evil in the world will vanish, that men’s hearts will grow pure, and criminal inclination will vanish.

Along the way, those same people dream of oppressing those they pretend oppress them. They see the destruction of our civil liberties as a victory to celebrate, and those who are affected by it as worthy only of contempt and scorn. In short, revenge and disruption is a key element to any efforts to impose a new gun control regime on America.

Right now, so-called “assault weapons”, aka “modern guns in common use” are a popular target, as are standard capacity magazines, gun parts kits, and the purchase of ammunition. The left seeks to destroy our Second Amendment rights through the death of a thousand cuts. First by taking away common guns used by millions of Americans, then by making it so no parts for a gun can be purchased except through an FFL with a background check, and then making ammunition difficult to purchase. Some even want to shut down lawful online commerce, under the misguided belief that those guns do not go to FFL’s for a transfer.

In short, nothing less than the near total elimination of gun rights in America will satisfy the left. Only their fellow travellers with Elmer Fudd shotguns and single shot flintlock muskets will be acceptable. Everyone else is basically out of luck.

What Can Be Done?

We are fortunate in that revenge fantasies rarely fully or ever play out. While Biden is racing to make himself look appealing to his supporters, the hard reality of life will soon kick into play. Ritual bills introduced to calm ivory tower academics and sooth box wine drinking suburban women will have to face the fact that many remain political suicide if passed.

We are more likely to see an ATF that abuses its rulemaking power to make life difficult for gun owners. Expect to see another attack on handguns with wrist braces, or perhaps on “firearm” classified shotguns that skirt the NFA through careful use of a tape measure.

We can also expect attacks on a state level where it is easier to pass bad laws and hard to fight them through state and Federal courts. In a way, this strategy mimics that of the anti-abortion movement, who rely on local methods to undermine something already encoded as a right.

Fortunately fighting back on a state level can be easy too, especially with all the social and economic disruption from the response to COVID-19. Many legislatures are busy trying to fix problems they created and will be distracted from their traditional anti-gun assaults. But that is no reason to let your guard down, but rather a call to double down on resistance to these assaults on our freedom.

Get Your Own FFL While You Are At It

In a worst-case scenario, FFL holders will almost always be exempt from regulation, because they have to handle gun transfers for more privileged buyers like law enforcement or to ship evil scary guns out of state.

Guns held in your FFL inventory as demo guns, samples, range guns, or example weapons, particularly if you are an 07 manufacturer are a perfectly legitimate way to place your gun collection under the protection of an FFL while also engaging in legitimate commerce and building a business.

FFL123 has helped tens of thousands of people just like you get the FFL they want and deserve. Biden may crack down on kitchen table FFL’s and small home based FFL’s, but if you act now and get yours today, you can enjoy the benefits of being grandfathered in.

Nobody likes to be afraid or to use scare tactics, but with a Biden presidency, we are in for four long years of assaults on our civil liberties, and it is better to be safe than sorry.

Visit FFL123 today and choose the best selling online FFL guide that is right for you, and learn from industry insiders how you can be guaranteed to get your FFL, plus grow your business with expert knowledge unavailable anywhere else!