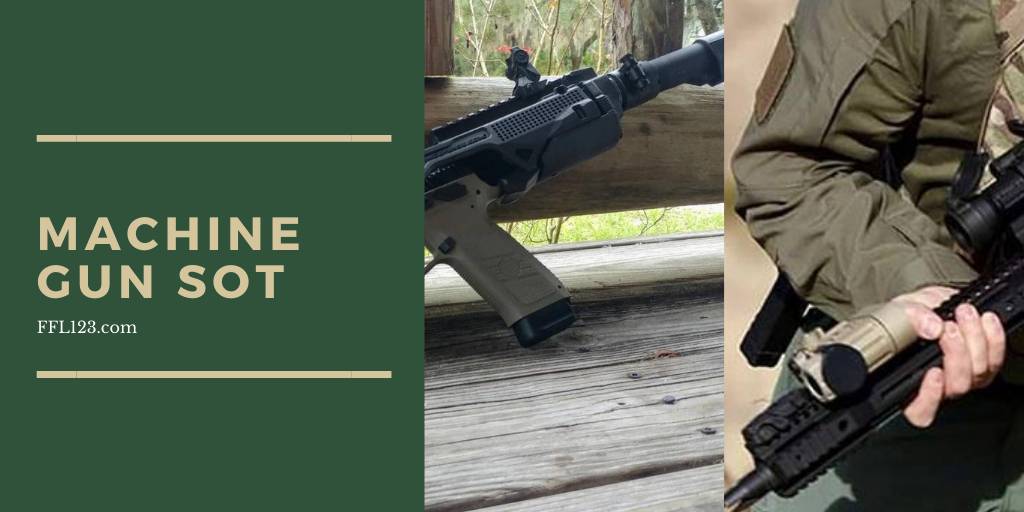 There is a lot of confusion about owning machine guns or what it means to be an SOT gun dealer or manufacturer. For that matter not everyone knows how an FFL gun dealer can handle machine guns. So we are going to look at some of the history of machine guns, their regulation and how you can legally acquire one today, even in states that are not friendly to machine gun ownership. Along the way, we’ll explain terms like Pre May 1986, Dealer Sampe, Pre May sample, and other things that might be confusing.

Some of the earliest practical mass firing guns were simply rows of barrels arranged in different configurations and fired all at once. These so-called volley guns were of limited military or practical use in the days of the flintlock or percussion cap and never saw much use. Other guns, like the flint ignited Puckle Gun promised incredible firepower for the time, but saw almost no use, with perhaps four or five ever being built. However, a 1722 mention of these guns is also possibly the first time the term “machine gun” was ever used.

Later rotary crank guns like the famous Gatling gun saw far more use, and some private ownership among people who felt they needed incredible amounts of firepower. By the time the Spanish American War rolled around, not only were belt fed machine guns available, but one could buy them directly from Colt. Two such guns were purchased and given to Teddy Roosevelt’s Rough Riders. One remained in private ownership with Roosevelt after the war and exists to this day.

It wasn’t until after WWI that shoulder fired smachine guns became commercially and technologically viable. With commercial copies of the BAR like the Colt Monitor, and the Thompson submachine gun on the market, private ownership was possible but not common. Most firearms enthusiasts had no use for these guns, gun culture mostly focused on hunting and perhaps small concealable revolvers and pocket semiautomatic guns for self defense, and anyway, bolt action rifles were the choice of militaries and hunters around the world and were readily available.

All this made it easy for the government and press to vilifiy machineguns as “gangster weapons” (even though it is likely that most uses of machine guns by gangsters involved guns stolen from military or police arsenals, not private purchase). This lead to the passage of the 1934 National Firearms Act, which imposed a $200 tax on machine guns which was about what most common ones cost at the time. It was felt by effectively doubling the cost of a machine gun and requiring registration at the discretion of local authorities that the Prohibition era scourge of crime would end. This, of course, did not happen, but for the first time, the Federal government has laid the foundation for national gun control and was not about to let that go.

As time passed, a $200 tax became less prohibitive, and more and more machine guns entered private ownership as curiosities and war trophies from several US wars. It was the 1986 Hughes Amendment to the Firearms Owners Protection Act which closed the NFA registry to new machine guns. After May 19, 1986 private citizens would no longer be allowed to register new machine guns, however transfers of such guns could still be allowed. Today, machine guns are increasingly expensive, and becoming investments rather than practical firearms for use. However, there is still a way to get a brand new machine gun. Interested? Keep reading…

Today, only government agencies can acquire new machine guns. But they still need dealers to buy them from and manufacturers to make them. While big military contracts go to big defense contractors, there are a host of various local and state law enforcement agencies that like to buy machine guns.

An 03 SOT needs a letter from a law enforcement agency asking to see a particular machine gun demonstrated. This is called a demo letter, and the gun called a dealer sample. Only 02 and 03 SOT’s can acquire dealer samples, and only with a demo letter. Once you allow the agency to examine the gun, it is yours to keep as long as you maintain your SOT. Many SOT holders acquire demo guns from friendly local law enforcement requests.

However, if you cannot get a demo letter, an 03 SOT gun dealer has no other way of acquiring a machine gun. If you are an 02 SOT though, as a manufacturer you are entitled to build as many machine guns or other NFA devices as you wish (following a certain procedure of course) and may retain them for as long as you maintain your SOT.

That’s right, you CAN build a machine gun legally and keep it for as long as you wish and are in business!

Now you might say this sounds all sorts of shady and like a loophole the ATF does not like. In a way this is both true, and not true. It is absolutely true if you are not using your FFL and SOT to conduct business, you’ll lose both (and any machine guns you built) really fast. However, as long as you are conducting business, there are all sorts of reasons to build legal machine guns, including proof of concept, experimentation, range rentals, demo guns, movie prop rentals, and more. And along the way, as an incidental to doing business, there is literally nothing wrong with enjoying the machine guns you have built or acquired. In fact, it would be stupid not to!

We’ve shown you that you can in fact build and acquire machine guns as long as you are in business and have the right FFL gun dealer or manufacturer licenses. But there are a few different legal classes of machine guns, and terms you should know as well.

Ready to Get Your SOT ?

No matter if you want an 02 or 03 SOT gun license, there are a lot of hurdles to overcome. Not only do you have to get a regular FFL, you then have to successfully apply for your SOT. That means knowing a lot of different regulations, laws and procedures. After all, even an 02 SOT can’t just start cranking out machine guns in their garage – the ATF likes to know what you are doing.

Now you can work all this out on your own after extensive study of appropriate laws and rules. Or, you can take the fast, easy and simple way out.

FFL123 has been helping people just like you get their FFL and SOT for over 15 years and has tens of thousands of satisfied customers. Our team of industry insider experts have many decades of cumalitive knowledge and have applied all of that to making sure that if you want an FFL and SOT, then by golly your’ll get your FFL and SOT. In fact, if you don’t you get 150 percent of your money back!

Ready to use the best online FFL guide out there? Ready to take advantage of a team of industry insiders who will work with you every step of the way? Then discover the FFL123 advantage, and get our FFL and SOT online FFL guide today!