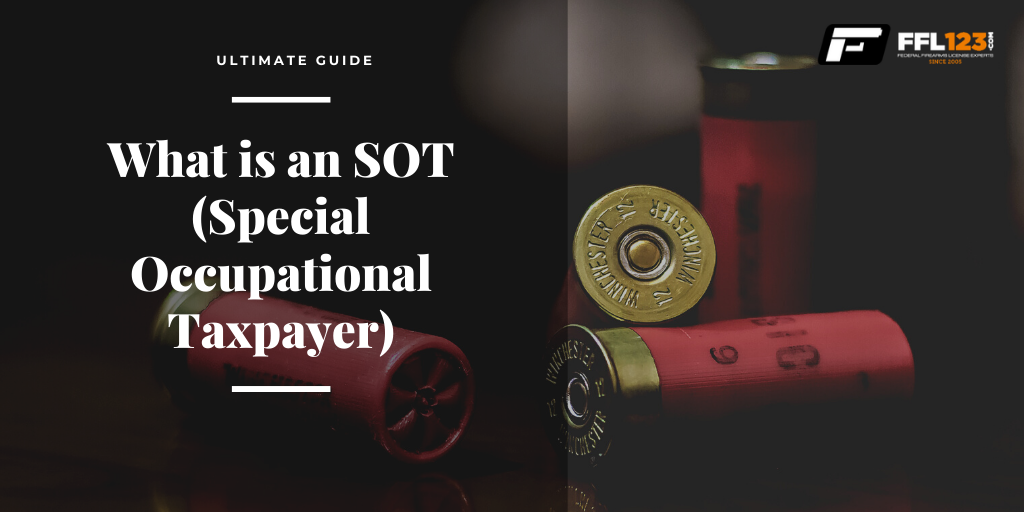 We often get asked just what is an SOT? What does SOT mean? And what is a Class 3 dealer?

Well, an SOT is a Special Occupational Taxpayer, that is to say somebody who pays a fee to the ATF for the ability to deal in or manufacture NFA items like silencers. A Class 3 dealer is something of a misnomer, because that term is more made-up than official. But it is in common use and tends to be a shorthand for somebody who deals in (but doesn’t make) NFA items. But we’ll talk about Class 3 stuff in a minute.

For now, let’s start at the beginning and dig deeper into SOT’s, what exactly you can do with them, and how you get them…

Just What is an SOT?

As we previously mentioned, an SOT is a Special Occupational Taxpayer. That’s government speak for “somebody who does things we don’t like but everyone else loves, so we are going to tax and license them for it.”

SOT is really a status. That’s why it is technically incorrect to call an SOT a license, or refer to a “Class 3 license”. With an SOT all you are really doing is taking an existing Federal Firearms License, and adding a special occupational class and tax to it – that of somebody who works with NFA items on a commercial level.

So to start off with, an Special Occupational Taxpayers is something you get with certain FFL’s in order to engage in different forms of business involving NFA items. Now let’s take a look at which SOT’s do what with which FFL’s.

There are three different kinds of SOT’s you can get and each depends on what you plan to be doing with your FFL and SOT status.

For more information on the types of FFL’s and what they do, click here. This will help you understand why certain FFL’s are required with certain SOT’s. For instance, a Type 01 FFL is only for retail gun sales and gunsmithing. That’s why you’d never pair an 01 SOT with it, because that SOT is only for importers.

This is a very specialized SOT that serves little purpose unless you are a player in the military industrial complex or have picked up some rather oddball government contracts. Now there are an odd few NFA items that are also Curio and Relics that might be importable as such, but that is a case by case basis.

Use the Class 01 SOT with a Type 08 FFL if you are importing NFA items like machine guns and other traditional firearms or silencers. When used with a Type 11 FFL, you can import more exotic things like explosive munitions, artillery, or other such things. Basically for use when importing AOW’s and Destructive Devices.

So for most people, the Class 1 SOT is a strictly commercial endeavor for people with deep pockets and military or government contracts or who are doing some research and development. Either way, Joe or Jane Average American isn’t going after this Special Occupational Taxpayers, no matter how cool it would be to try and import a case of RPG-7’s.

The Class 2 SOT status is pretty darn cool. It lets you make NFA items when combined with a Type 07 or 10 FFL. Both of these are manufacturing FFL’s. The 07 FFL is a general purpose manufacturing FFL, while the Type 10 allows for creation of destructive devices and armor piercing ammo.

Most people find an 07 FFL/Class 2 SOT is the perfect combination because you can make and sell pretty much any kind of firearm or NFA device including machine guns. We should note that the market for machine guns is limited to other SOT holders and government agencies. But there is nothing stopping you from building a machine gun for any legitimate business purpose.

In fact, this is the most common way to gain access to post May 1986 machine guns and combine business with pleasure! Of course you can build other NFA devices too like silencers and short barrel rifles and shotguns which can be readily sold to private citizens.

The famous “Class 3 license”! The term Class 3 License is so embedded in popular culture, that like calling a magazine a clip, it simply will never go away. Your Class 3 SOT pairs with a Type 01 or 02 FFL (general retail gun sales or gunsmithing, and pawnbrokers respectively) and is simply an SOT for those who wish to resell NFA items.

Because the Type 01 FFL is very popular, and many FFL holders only wish to engage in resale, not manufacturing, a great many FFL holders go for the Class 3 SOT and become “Class 3 Dealers”.

How Do I Apply for an SOT?

First you have to have an FFL. Then you need to download and fill out this form. However, there is more to getting an SOT than just filling out a form. While you might feel comfortable just getting the SOT status (and it really isn’t that hard) we do offer a special SOT license guide to help people fully understand the complexities of life as an SOT.

If you don’t have an FFL yet, and want to get an FFL and SOT, the we also have a deeply discounted package deal for our powerful FFL application guide, plus our industry leading SOT application guide!

SOT’s have to pay an annual tax of either $500 or $1000 dollars to the ATF every year. SOT’s who have an income of under $500,000 per year may qualify for a reduced rate of $500. SOT’s who engage in manufacturing may have to pay an additional $2500 ITAR fee each year, although enforcement and interpretation of that rule changes regularly.

Anyone can file a government form and pay a fee (well almost everyone, we all know that one person who struggles to walk and chew gum at the same time…) but there is more to having SOT status than just paying an annual fee.

SOT’s are subject to a hideously complicated web of laws, regulation, policy, rules and seemingly made up on the spot enforcement issues that can be very hard to understand and navigate.

When you purchase FFL123’s SOT kit, you get the rock solid backing of nearly two decades experience with NFA dealing and working with the ATF.

FFL123 founder Brandon Maddox combined his MBA and love of business with his love of firearms, and built from the ground up, the nation’s largest silencer dealer with FFL’s (and SOT’s) in all 42 silencer legal states. That means his SOT guide isn’t just another by the numbers application guide.

It is the cumulative business, and industry knowledge of a lifetime, and it is available to you at the cost of a nice dinner out. Is it any wonder then that FFL123 has helped over 100,000 Americans get their FFL’s and SOT’s? Wouldn’t you like to be one of those lucky Americans, living the dream selling and building guns and NFA devices?

We can help. Just pick up our SOT guide or SOT and FFL guide kit, and unlock an incredible future with:

FFL123 customers also enjoy unique, customized support, even after they get their FFL and/or SOT. Gain access to exclusive member only forums where our team of industry experts and your peers can answer your questions and share knowledge.

What are you waiting for? Get started today with your FFL and SOT license kit!