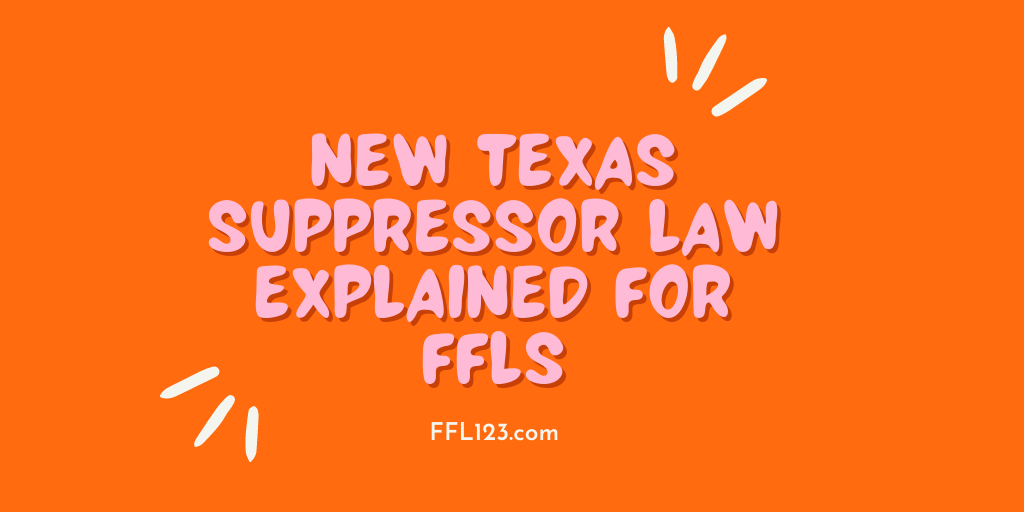 New laws, whether enacted on the local, state, or federal levels, can often be confusing. Adding to this confusion is the fact that many people try to boil legislation down to easy-to-digest snippets. Unfortunately, doing this often leaves out critical pieces of information that are necessary to the complete understanding of laws.

To help with this, we’re going to explain the new suppressor law in Texas that you have no doubt heard of by now and what it means for FFL holders.

Get a Free Report

Unique among them was House Bill 957, which repealed the criminal offense of possessing, manufacturing, transporting, or repairing a firearm silencer. It also ensures that any firearm suppressor manufactured in Texas, and that remains in Texas, will not be subject to federal law or federal regulation. That second sentence is what we’re really interested in here.

On the surface, this may seem to some as a way for the state government to thumb their nose at the federal government and avoid any pesky legal issues that can arise from suppressor ownership. In reality, the new law is more nuanced than that, and understanding what it does and does not do is extremely important to understand.

HB 957 simply removes the threat of state level prosecution for unregistered suppressor manufacturing, sales, and/or possession. It does not provide any level of immunity from federal level prosecution.

In this regard, it is very similar to state marijuana laws. While it may be legal under state law, it can still be prosecuted under federal law. In fact, it was this precedent that spurred the introduction of the bill by Representative Tom Oliverson in the first place. “You just sort of saw crickets from the federal government on the [marijuana] issue,” he said.

HB 957 prevents Texas state resources from being allowed to enforce the federal National Firearms Act with respect to silencers, suppressors, or gun mufflers. If any Texas official aids in the enforcement of the NFA in regards to suppressors, they are subject to losing any grant funds from the state for the following fiscal year.

Essentially, the new law incentivizes state-level law enforcement to disregard compliance with the NFA if they want to keep their funding intact. This means that the likelihood of Texas residents being pursued by Texas law enforcement for NFA violations is now slim to none, but it doesn’t mean that people are immune to NFA violations on a federal level.

While Texas may not be giving credence to the NFA, the federal government’s stance has not changed.

State and local law enforcement in Texas may turn a blind eye to unregistered suppressors; the ATF will not be doing the same. This means that even though it may be legal for a Texas resident to possess an unregistered “Made in Texas” suppressor under Texas law, the ATF can still prosecute the resident under federal law.

The new Texas law is taking direct aim at the Constitution’s commerce clause and how it is to be interpreted.

In theory, the new Texas law would allow residents to purchase Texas-made suppressors without going through the long and arduous process that involves NFA paperwork and the $200 tax stamp.

In practice, however, the new Texas law does little – if anything – when it comes to purchasing suppressors. Under federal law, suppressors can only be sold by specially licensed FFLs with the appropriate SOT. These dealers must comply with all federal laws (including registration) if they want to keep their licenses and stay out of jail themselves.

So really, there’s no way to legally buy one of these Texas-made suppressors from a dealer unless the dealer wants to put their livelihood on the line.

This essentially leaves only one way to take advantage of the new Texas law, and that is for Texas residents to build their own suppressors, which would traditionally be governed by a Form 1 instead of a Form 4.

Unfortunately, however, the ATF and federal law still require DIY suppressors to be registered and taxed with a Form 1, regardless of what state they are made in.

Need for a Test Case

The biggest thing this new law does is set the attorney general in Texas up for a test case. It will need to be carefully crafted in order to properly navigate all of the necessary legal channels. This will take a good deal of time to plan and execute, but it is absolutely necessary to do in the long run.

If all of this seems kind of confusing and worrisome while at the same time offering a glimmer of hope, that’s because it is indeed all of those things.

The best way to stay safe and legal in this changing time of suppressor ownership is to obtain your own FFL and SOT so that you can both make and sell suppressors in all 42 of the states where they are legal.

FFL123 is here to help you do just that. With our 150% money-back guarantee, you’ve got nothing to lose and everything to gain. Let us help you get your FFL and SOT so that you can start making money in the lucrative world of NFA devices such as suppressors.