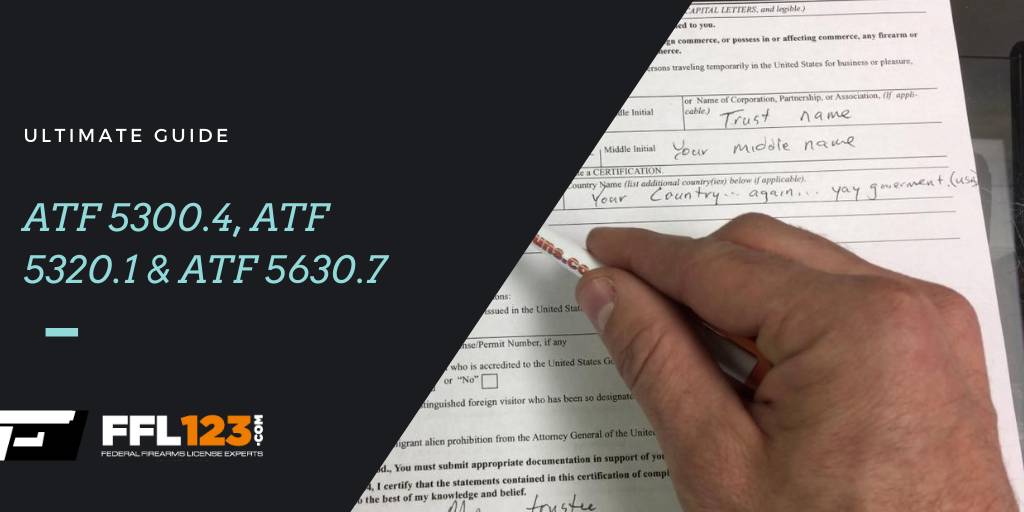 Welcome to the confusing world of ATF forms! Ok, now that the cheery sarcasm is out, let’s face it. The ATF seems to have a form for everything except making coffee, and they probably would if they could figure out how to get away with it. However, along with a fresh cup of coffee, we are most interested in three different ATF forms right now – the ATF Form 5320.1, or Form 1 as it is more commonly known, ATF Form 5300.4 or Form 4, and ATF Form 5630.7.

Because bureaucratic numbers are nonsensical and boring, and tell us exactly nothing about what each of these ATF forms do, we’ll take a closer look at each one, and when (or if) you ever need to use them.

This is perhaps the most popular of the 3 ATF forms we discuss. Form 5230.1 or Form 1 is the magical “Application to Make and Register a Firearm” that allows people to make and register an NFA device like  a silencer or other NFA item.

Because it is possible to build many different NFA devices from kits or by simply swapping parts, the ATF Form 5320.1 is extremely popular. With the rise of ATF eForms, it is even more popular, as it is possible to get approval to build your NFA device within weeks if done correctly.

The ATF Form 1 is for people who want to make and register homemade NFA devices. Because so many modern guns like AR style rifles are modular and also available in pistol form, it is very easy to built a high quality short barrel rifle by simply swapping a few parts, which is one reason the ATF Form 5320.1 is so popular right now. You can also get various forms of “solvent trap” kits that are totally not thinly veiled suppressor kits that just need drilling. Many people build these legally on an ATF Form 1 as well, although it is something of a legal gray area.

At any rate, if you have the right pile of parts or are handy with machine tools, a Form 1 build when properly filed electronically is a fast, easy and fun way to get into the NFA game, or get your next NFA device!

The ATF Form 5300.4 or Form 4 is one of those ATF forms you’ll never know about unless you are in the very specific situation of buying an NFA item from a dealer.

When do you use an ATF Form 4? When you are buying an NFA item from a dealer. Properly called “Application for Tax Paid Transfer and Registration of a Firearm” it is used when you buy an already existing NFA item, as opposed to making one on an ATF Form 1.

The ATF Form 4 basically requires you to submit a bunch of identifying information about yourself or your trust or corporation, some fingerprints, and payment for your NFA tax. Your dealer can efile the ATF Form 5300.4 as well, which can cut down on the notorious NFA wait time people deal with.

Basically then, you use the ATF Form 4 when you go to an NFA dealer and buy an NFA item. If you want to buy a silencer, it is even possible to get your ATF Form 4 handled entirely by mail through one company, which makes the process easier than ever for you.

An SOT or Special Occupancy Tax Payer, is somebody who has an FFL and has paid a special fee to the ATF to be licensed to manufacture, sell, import or export NFA devices. SOT’s must pay a variable tax to the ATF to keep their SOT status. To pay that tax, they must fill out and submit an ATF Form 5630.7.

Because the 5630.7 form is so specialized (only a few thousand Americans will ever have to fill one out) it isn’t something widely understood in the NFA world unless you are actually an SOT.

Like all ATF forms it is rigid and annoying, but not difficult to fill out, once you take the time to read and understand it. Because it pretty much is something used to pay a tax, it’s just one of those forms where if you have to do it, you do it and get it done with until the next tax bill comes due.

Want to Enter the World of NFA Firearms on a Whole New Level?

Anyone who can legally own a gun and lives in a state that doesn’t restrict them can get NFA items. That much is easy. But did you know it’s possible to get NFA items in all 50 states? Or even to build or buy brand new machine guns?

With the right FFL and SOT, you too can not only enter the financially lucrative world of selling or manufacturing NFA items, but you can also take some time out from work to enjoy them on your own time too, all perfectly legally.

Did you know that you can…

Interested? This isn’t some kind of sneaky loophole or barely legal gimmick. FFL and SOT holders not only have the chance to make good money with their business but also to enjoy the fruits of their labors and the merchandise they make or sell.

FFL123 has been helping people just like you get the FFL and SOT they want and deserve for nearly 20 years. We are the original online FFL guide, and offer unbeatable prices and support to our members. Our team of industry insiders and experts will walk you through every step of getting your FFL and SOT, and guarantee you’ll get it, or we’ll give you 150 percent of your money back!

What are you waiting for? There is no better time to get your FFL and SOT than today. Let’s get you started right now!