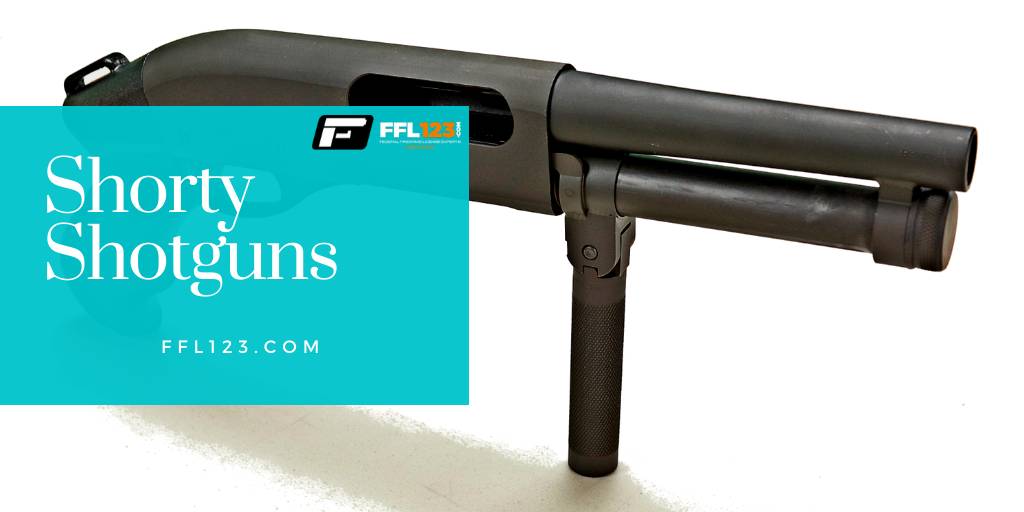 However they encompass a huge range of types and even trademarks. For instance the Serbu Super Shorty is a specific design of shorty shotgun made by Serbu. Other shorty shotguns could include various other NFA restricted shotguns, or the increasingly popular bird’s head pistol grip shotguns that are classified as “firearms” even with a barrel barely over 14 inches. We’ll take a look at a few variations on the shorty shotgun them so you can decide which one you like the best!

What is a Short Barrel Shotgun?

Broadly the ATF considers any shotgun designed to fire from the shoulder or made from a shotgun designed to fire from the shoulder with barrels under 18” to be a short barrel shotgun (SBS). A more nuanced explanation can be found here, but for most people this is sufficient. Some may recall the tragic events at Ruby Ridge were sparked by the sale of a shotgun to undercover agents that was supposedly ¼” under the 18” mandate of the National Firearms Act.

Suffice it to say, the ATF takes an unhealthy interest in the absolute minutia of laws around short barrel shotguns and the Feds apparently won’t hesitate to gun down unarmed people in order to make sure shotguns that aren’t too short aren’t in circulation without the correct paperwork.

Not all states allow the ownership of properly registered SBS, but there are some other avenues for people who want to own a shorty shotgun but cannot get an SBS.

Perhaps the most famous shorty shotgun, and the one that bears the trademarked name “Super Shorty” is this offering from Serbu.

Now an AOW or Any Other Weapon is something entirely different from a SBS. Where an SBS starts with a gun intended to be shoulder fired, an AOW starts with a gun that is neither a handgun, nor a shoulder fired arm. As you can see here, AOW’s are a sort of mixed bag of everything else that couldn’t be readily defined by the government. They are also unique in requiring a $5 tax stamp to transfer as opposed to the $200 stamp that all other NFA guns use.

Because the NFA was designed to apply a then punitive tax on certain guns to make them extremely difficult to acquire, AOW’s with their $5 stamp were likely the strange batch that the people drafting the NFA thought should be regulated but not regulated too much. In other words, the traditional class and race based biases of gun control thought these guns were “somewhat” okay.

Shotguns under 26” or designed to be carried concealed with barrels under 18” and built from a gun that never had a shoulder stock on it are the most common sort of shorty shotguns. But they are still NFA regulated devices. But if you want a shorty shotgun you can legally conceal this is probably the best and cheapest way to go.

There is a third option if you want a shorty shotgun that isn’t regulated by the NFA.

A peculiar class of 14” shotguns exist that take advantage of how the NFA is written to give you a legal, over the counter 14” barrel shotgun.

Pioneered by Mossberg as the Mossberg Shockwave, these guns manage to scratch the itch for a lot of folks who want a shorty shotgun without having to go through the hassle of the NFA.

What makes these guns possible is a careful reading of the NFA. One requirement for an SBS or AOW is that it generally be under 26” if not made from a shoulder fired gun. Because these 14” shorty shotguns start out as receivers fitted with a birdshead grip and a 14” barrel, and are built to barely exceed 26”, they are exempt from NFA requirements.

Keep in mind, to get that over 26” overall length and keep a 14” barrel, the somewhat elongated bird’s head grip is needed on these guns, as it adds precious length to a package that pushes the boundaries of the NFA.

There is one glaring exception to that – if you conceal your 14” shorty shotgun it technically becomes an NFA item, as one criteria is that these guns are not treated as concealable weapons. If they were, then they’d have to be NFA registered. It’s a fine distinction, but remember if the Feds will shoot Randy Weaver’s wife over ¼” on a shotgun, they’ll find a way to come down on you like a ton of bricks if you make a habit of carrying a 14” shorty concealed without registering it.

Prior to the advent of the 14” shorty shotguns, the only real way to get a shorter than average non NFA shotgun was to buy one of the common 18” pistol grip shotguns. Also classified as a “firearm” or “other” these guns are ubiquitous and in common use with everyone from private citizens to law enforcement.

Assuming you don’t mind an extra 4” or so on the barrel, some people find these shotguns to be more desirable than the bird’s head grip 14” shorty shotguns as the traditional pistol grip is more comfortable to some.

Make and Sell Your own Shorty Shotguns

We’ve discussed how to legally get around the NFA before. However, NFA guns are a huge business in the US, and the barrier to entry for making or selling them is surprisingly low if you approach it with both eyes open.

With the right FFL and SOT, you can make and/or sell NFA devices like shorty shotguns, silencers and even machine guns! FFL123 has devoted nearly two decades helping tens of thousands of Americans just like you get the FFL they want and deserve. No matter if you want to run a small, part time kitchen table home based FFL, or setup a machine shop building NFA firearms, we are here to help you!

Check out our Class 3 and NFA licensing kit and get started right now with your FFL and SOT!